Pixel 4a vs Oneplus Nord: Go Nordic or Stay Simple?

A week back OnePlus went back to its roots to create OnePlus Nord, a true budget flagship phone (as per their claim), and a day before its sale Google launched Pixel 4a – a Best in class camera Phone for 49$ cheaper! Google Pixel 4a vs OnePlus Nord was the battle we all saw it coming!

Now we have both phones in Front of us, Lets answer the question should you go true Nordic and buy an OnePlus Nord or Stay simple and rock a Pixel 4a?

Pixel 4a vs OnePlus Nord Design: 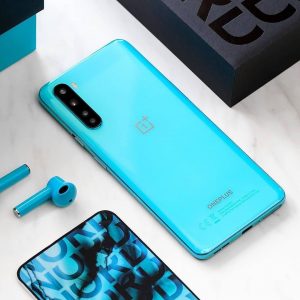 OnePlus Nord comes with a 6.44 inches Full HD+ AMOLED Panel ( HDR10+ certified panel) with a 90Hz refresh rate with corning gorilla glass 5 protection to the front and back! For the pixel peeps out there it has got 408 PPI! This is a glass sandwich design with a metal powder-coated ( A metal look-alike ) polycarbonate frame! It definitely looks and feels premium in hand. 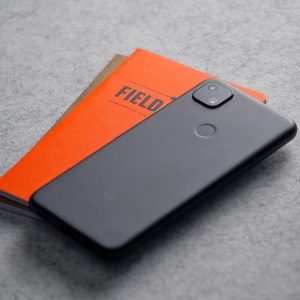 Google Pixel 4a comes with a smaller 5.81 inches Full HD+ AMOLED Panel (without 90Hz refresh rate) with corning gorilla glass 5 protection. Even though we miss on the higher refresh Rate this is still a gorgeous panel and looks exactly as good as the one on OnePlus Nord.

Google Pixel 4a comes with a polycarbonate unibody design with a matte black finish and feels nice in hand! I really love the fact that they didn’t try to over-achieve fake gradient design ( usually turns out bad) and kept it simple! Since it’s a plastic body on the upside its doesn’t get shattered if dropped but on the downside, it gets scratched easily and has less structural strength ( Neither OnePlus had good structural strength due to poor design flaw )

For brightness outdoors, pixel 4a can go up to 750 nits peak brightness, much higher than 450 nits on OnePlus Nord and 400 nits on pixel 4 just for comparison! If you stay more outdoors Pixel 4a is the way to go!

If I had to pick a phone between Google Pixel 4a vs Oneplus Nord based on design I would pick Oneplus for better Refresh rate panel and premium glass design, but I can’t get over how good Pixel 4a feels in hand especially with small form factor and grippy matte finish! The buttons are very clicky and haptic feedback is also very good on pixel! I just miss the high refresh rate!

Pixel 4a vs OnePlus Nord Performance: 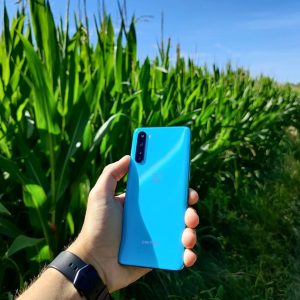 OnePlus Nord is powered by Snapdragon 765G ( Latest 7nm finfet technology ) with Qualcomm’s custom  Kryo475 CPU with a clock speed Up to 2.4 GHz built on top of 64-bit architecture it has a 5G modem built-in ( X52 Modem-RF System ) and supports Dynamic Spectrum Sharing (DSS), mmWave, sub-6 GHz band. Coming day to day use there is plenty of horse-power to run the show, Blazing fast oxygen OS and 90 Hz display is just cherry on top! There are no performance hiccups for day to day task’s and Multitasking works just fine.

For gamers and heavy graphic users out there, this is not a high-performance phone, Adreno 620 GPU is Fine for casual gaming and we found some interesting cooldown options present inside from JerryRigEverything Video. If you are looking for an absolutely performance-oriented phone neither of these is a choice! Go for Oneplus 7T, Redmi k20 pro, or Realme x2 Pro instead. Google Pixel 4a on the other hand is powered by a Snapdragon 730G chipset ( Older 8nm finfet technology ) with Qualcomm’s custom  Kryo470 CPU with a clock speed Up to 2.2 GHz built on top of 64-bit architecture. For the graphic side, we have  Adreno 618 GPU and is good enough for day to day tasks! Stock Android makes things better but occasional lag can be observed due to old chip but nothing deal-breaking.

When Google Pixel 4a vs Oneplus Nord is compared in terms of raw performance we can say that Nord is 20% faster than Google Pixel.

Pixel 4a vs OnePlus Nord Camera: 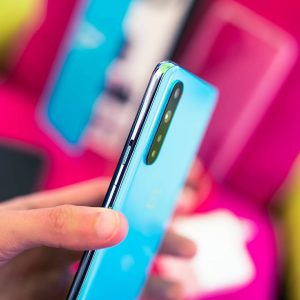 I would call this a 1½ camera setup! The reason being a macro lens is a trash and zooming photo literally gives better image quality and depth sensor is just there for portrait shots! 8MP wide-angle is good when a good amount of lighting is present but if you are a little bit out of ideal situation don’t even think of it!! 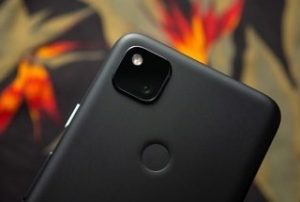 Google Pixel 4a on the other hand comes with a 12.2MP, ƒ/1.7 aperture Sony IMX363 sensor ( OIS + EIS stabilized ) and that’s it! This is a pretty old sensor but pixel seems to have mastered it as they are using from Pixel 3 to Pixel 4 and now on Pixel 4a! But where Google has done a significant upgrade is in software and post-processing and crushes the competition with its old sensor!

For all the below comparison for good measure, we have thrown in a sample from iPhone SE as well as it also comes at the same price point. 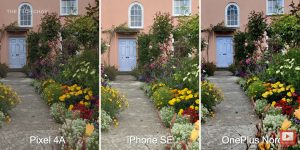 Given a good amount of light we can see that OnePlus NORD goes for a punchy Vibrant and aggressive dynamic range photos and loses a bit of detail due to sharpening!, Google Pixel 4a photo stay more true to life and are better exposed! 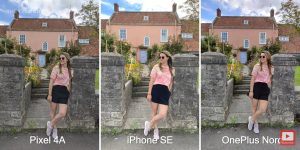 Pixel Again goes for a natural look here but I find that Nord has done a bit of skin smoothening which is not bad, But both photos look equally good, and dynamic range are almost the same in both the shots. 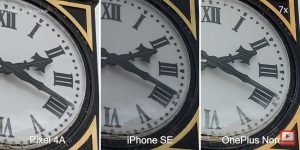 In spite of higher resolution on Oneplus NORD if we zoom in Pixel 4a is the one that retains more details with less noise. ( thanks to its Super-res zoom feature ) 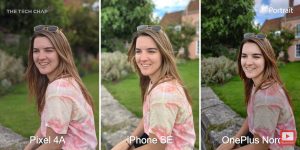 Pixel 4a takes the sharpest and the most professional looking photos with natural skin tones, on the other hand, OnePlus Nord goes for more of an Instagram ready picture, I say both are equally good but I prefer the one from Pixel 4a.

Both Pixel 4a and OnePlus Nord come with their own night sight and both of them do equally good with long exposure photos on a cool well-lit light or an outdoor background. OnePlus photos are usually brighter in low light shots as it has 48 MP shooter that undergoes Pixel binning for an effective 12 MP shots, But if you zoom in Pixel has more details due to its superior image processing algorithm 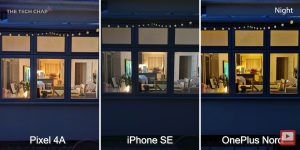 When it comes to Indoor shots or anything that involves warm lights ( like street bulbs or indoor CFL bulbs ) OnePlus Nord photo looks so bad! Its white balance is totally off and gets yellow tint in its pictures! ( Hope Oneplus Nord fixes this with a software update )

Pixel 4a vs Oneplus Nord Selfies: 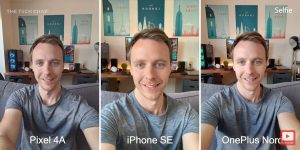 When it comes to selfies both Oneplus Nord as well as Pixel 4a take some good selfies! But the selfies on Nord are better with much more details due to its 32 MP shooter and also adds an ultrawide angle lens which is always cool to take Group selfies! Just like the Pixel 4a, the skin-tones are also natural here!

Pixel 4a vs Oneplus Nord Video: 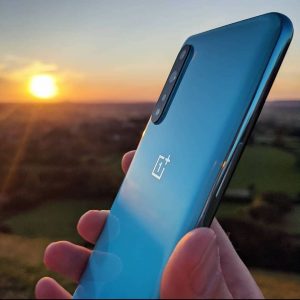 When it comes to video both OnePlus Nord as well as Pixel 4a take some good videos that are very well stabilized thanks to OIS + EIS present in both the systems. The videos are pretty much the same and you can visit this link from Tech Chap channel to see a detailed video comparison. ( Thanks to Tech Chap for all the comparison help ) 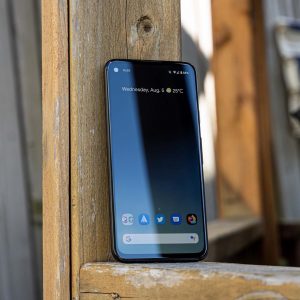 When it comes to taking good point and shoot photos either in good daylight conditions or in the low lit environment I would prefer Pixel 4a every time over OnePlus Nord for its natural high-quality images with excellent dynamic range, superior software, and image processing algorithms like super res zoom and night sight! When it comes to front camera selfies I would give it to Nord for extra details, natural skin tones, and extra ultra-wide lens for group selfies! In the video Department, both are equally good!

If I had to pick one among Pixel 4a vs Oneplus Nord Camera I would pick Pixel 4a as differences where one plus Nord one are minor and where Nord lost are major differences! Also since Pixel 4a is a software-focused phone, with future updates even more capabilities and features will be added! On the other hand, Oneplus Nord being a hardware-centric phone, the future capabilities are pretty limited! 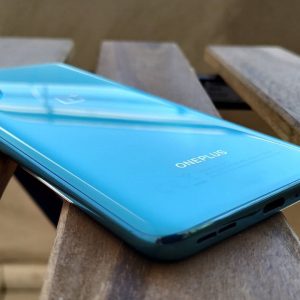 Oneplus Nord comes with 4115 mah battery with 30W warp charger included in the box, This is easily a full day battery phone with at least 20% charge left! If you run out of juice Warp charge can get you to 50% under 30 mins and full charge within an hour!

Pixel 4a comes with 3140 mah battery with 18W quick charger in the box, upfront the battery might look smaller but a smaller display, standard OLED pannel, and stock android mean u can easily squeeze a day of battery out of it! Charging speeds are a bit slower and take 90 mins to fully charge the battery!

Pixel 4a vs OnePlus Nord Conclusion: 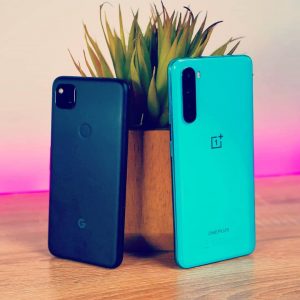 If you are in a market for buying a smartphone under 400$ in android Eco space and you are not from the Asian market (sorry we are too spoiled by too many offerings) there is not a lot of choices!

OnePlus Nord promises on the best user experience under 400$ ( These are not flagship killer’s as they themselves make flagships now and they can’t kill sales of their own phones) price point and they seem to have delivered it! This phone is a good allrounder and to achieve this price point a lot of compromises were made! This phone is a jack of all but master of none!

Pixel 4A on the other hand does exactly what it is meant to do! Take exceptional photos that even $1000 phone can’t match and pair it with good hardware and exceptional software experience you could see where it is going for!

Pixel 4A is hands down the best camera at the budget segment in every aspect and I would wholeheartedly recommend it! For anyone else pixel has kept everything simple! Plastic unibody, smaller OLED screen, headphone jack, good speakers, nothing flashy but just Simple, Performance takes a hit for gamers and even heavy users sometimes and if you make a habit of clearing RAM it wouldn’t be an issue!

Pixel 4a with 90Hz refresh panel and a powerful chipset like SD 855 would just have made this a perfect phone for $399 but still for every camera lover and normal user I would recommend Pixel 4a and for the power user, I would recommend OnePlus 7T and not OnePlus Nord! OnePlus Nord is in a weird position where it simply doesn’t do anything best and seems to be Jack of all and we don’t recommend Jacks when there are masters in the category!